For a long time the place has been well known as "Virgin Mary monastery". It has also been reputed as "Muharraq Monastery", and "Mount Koskam Monastery". The monastery got its name "Al- Muharrq" from the derivatives of the Arabic verb "ha-ra-ka" (Arabic past verb) - means "burn" in English - where "Muhrraq"/"burnt" is the passive participle, while "Muhrraq"/"burning" is the active participle.

The monastery neighbourhood was a place for gathering and burning herbs and weeds. So the whole region was called "The Burning or Burnt Area" In time the monastery was denominated with " Al- Muharraq". The "El or Al" is the Arabic definite article "The". While "Al Muharraq" is an Arabic word, "Koskam" is an ancient Egyptian name dating back to pharos age.

The word consists of two syllabuses "Kos" and "Kam". "Kos" was a name of a city - non-existent now - which was the capital of the fourteenth district. Upper Egypt was divided into 22 districts. Nothing remains of the city or the district except the "Berba" or the "Temple". The word "Berba" has two meanings, religious and civil. The religious meaning is "the highest place".

The civil meaning is "burial" or "mummifying and wrapping the body in linen for burial". The second syllable of "koskam" that is "kam" was associated with the area to the west of the fourteenth district. The religious meaning of the word is "the limitlessness/endlessness or forever".

The civil meaning - according to the historian Abu Al-muharraq - is "burial place in reeds for the paupers". Because "kos" and "Kam" are near together and neighboring, the area and the mountain are called "Koskam" that is whence the monastery has got its name. 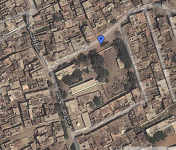