The Monastery of El Ganadla, also called the Monastery of the Virgin, is located in pharonic quarries to the west of the village of al-Ganadla on the left bank of the Nile, and is about twenty-five kilometers south of Asyut. The monastery is in a rocky cliff and is composed of two churches built into old quarries. The older of the two churches is dedicated to the Virgin Mary and contains an altar dedicated to Abu Maqrufah.

The monastery itself is enclosed by walls on three sides, with its western wall formed by the cliff. It is entered through a doorway in the northern wall of the enclosure. The Church of the Holy Virgin is built into the mouth of an ancient quarry that extends into the cliff.

This church marks the site of a famous monk’s dwelling place. It is also associated with the visit of the holy family to Egypt, and is a cave where the holy family is said to have rested. At the western end of the cave are numerous wall paintings. All the architectural elements of the niches, walls and ceilings in the church were painted, probably in the sixth century.

These early murals were plastered over in the eleventh or twelfth century and repainted with a series of saints, angels, and, on the north wall, Communion of the Apostles. The newer church, the Church of the Apostle, dates to the 1860s, and is east of the old church. It has three domes and three haikals, dedicated to Saint Macrobius (north), Saints Peter and Paul (center), and St. George (south). 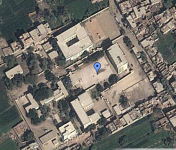