Anba Hatre was named for an anchorite who was consecrated a bishop by Patriarch Theophilus; he died in the time of Emperor Theodosius I (379-395). By the sixth century there was a monastic settlement in the region of Anba Hatre’s hermitage. It was extensively rebuilt in the eleventh century and by the end of the thirteenth century had been abandoned.

Over time it came to be referred to as the Monastery of St. Simeon. The monastery is divided into a lower and upper terrace by a cliff. The terraces are enclosed by a wall with a parapet and have their own gates. The lower terrace holds the original rock caves of the saints, the church, the baptistery and rooms for pilgrims. The church is the most important example of a domed oblong church in Egypt.

The upper terrace is a large keep with living quarters for the community. A permanent housing complex, the keep is the most developed of its kind. It holds cells for the monks, a refectory, a kitchen and workshops. The monastery also holds tombstones of great import, and pottery kilns, significant for research on Aswan pottery. 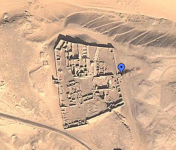