About Al Muallaqa (The Hanging church)

The Hanging Church is also referred to as the Suspended Church or Al-Moallaqa. It is called the Hanging Church because it was built on the southern gate of the Roman Fortress. Logs of palm trees and layers of stones were constructed above the ruins of the Roman fortress to be used as a fundament.

The Hanging Church is a unique church and has a wooden roof in the shape of Noah’s ark. From the 7th century to the 13th century, the Hanging Church served as the residence of the Coptic Patriarch. Al-Moallaqa has witnessed important elections and religious ceremonies.

The famous miracle of moving the Moqattam Mountain is closely related to al-Moallaqa. Al-Mu’izz, a Fatimid khaliph, asked Patriarch Abraham (975-978), the 62nd Patriarch, to prove the truth of a verse in the Bible. Al-Mu’izz asked Patriarch Abraham to move the Moqattam Mountain in order to prove the words of the gospel “If you have faith the size of a mustard seed, you shall say to this mountain: Remove from hence to yonder place, and it shall remove“ (Matthew 17-20).

The wooden screen is a unique piece of art and richly decorated with geometric patterns and crosses in ebony and ivory. The wooden screen is crowned by precious icons, in the center the enthroned Jesus, on the left side the Virgin Mary, Archangel Gabriel and St. Peter, on the right side John the Baptist, Archangel Michael and St. Paul. 15 icons describe the life and torture of St. George, 7 icons give an insight into the life of John the Baptist. The impressive pulpit of the Hanging Church is from the 5th century and rests on 15 gracile columns.

On each side of the pulpit a cross is depicted above three steps symbolizing the three days during which Jesus Christ was in his tomb and his resurrection. 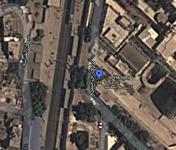