The Monastery of the Syrians (El-Sourian) was erected as a result of a sixth century schism by Theodosian monks, followers of the doctrines of Severus of Antioch. These monks left the Monastery of St. Pshoi in Wadi al-Natrun, and founded their own monastery nearby. Wadi al-Natrun (“the valley of natron”) is a desert of depression 50 kilometers long located about 90 kilometers northwest of Cairo and is the most important monastic center in Egypt.

Around 710 AD Syrian merchants purchased the monastery, which was converted for the use of Syrian monks. It was called “the Monastery of the Mother of God of the Syrians”. It was sacked by nomads in 817 and restored in 850. The monastery remained predominantly in Syrian hands until the Coptic patriarchal synod installed a Coptic abbot in 1636. His Holiness Pope Shenouda III served as a monk in this monastery and has a cell in the desert outside the monastery walls.

The tower and enclosure wall which still surround the monastery’s buildings date from the ninth century. The Church of the Holy Virgin Mary dates to 645 AD. The Church has a rich trove of paintings that provide a singular opportunity for increasing our knowledge of Christian art in Egypt. Successful restoration and conservation campaigns, which began in 1991, have led to the discovery of important mural paintings of different periods. Many more are expected to be found in the years to come. 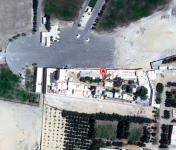