The monastery is named after Saint Macarius the Great, and is considered one of the most significant Coptic monasteries in existence because of its impact on the Coptic Church. It has been a source of the culture on which nearly all ecclesiastical Coptic life is based, and has supplied the Coptic Church with more prelates than any other monastery. It has provided more than a quarter of the Coptic patriarchs.

When the Byzantines ruled Egypt and did not allow the patriarchs to live in Alexandria it became a patriarchal residence. The monastery has been pillaged many times over the centuries. After the Arab occupation in the 7th century, a new church was consecrated there. It was much larger than the present day Church of Saint Macarius and encompassed the Church of the 49 Martyrs. This smaller church commemorates the forty-nine monks who suffered martyrdom during the sack of 444 AD.

The Church of Saint Macarius at one time housed the head of St. Mark. The sanctuary of Saint Mark, which was named after him, is also called the sanctuary of St. John the Baptist, because his relics are buried there. The keep is considered to be one of the most interesting keeps of all the Coptic monasteries. Today, the monastery has been completely renovated and has reclaimed large tracts of desert and is a center for livestock production and agricultural experimentation 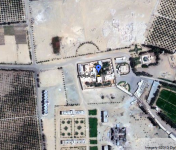