It is located at the foot in the Wadi Araba near the Red Sea. The monastery is named after the famous figure of monasticism, St. Antony. Probably in the second half of the fourth century a monastic community gathered around the site where the saint lived. The historian Sulpicius Severus (ca. 360-420) reported about the existence of the monastery.

In 407 St. John the Little fled from Wadi al-Natrun to the monastery of St. Antony because of the attack of the nomads. At the beginning of the 13th century the Church historian Abu al-Makarim/ Abu Salih stated that the monastery was fortified, and the cells of the monks looked onto a garden. Many European travelers visited the monastery, noting that Syrians, Ethiopians, Franciscans, and Armenians lived there in medieval times. It was abandoned and pillaged in the time of Patriarch John XIII (1484-1524) and repopulated under Patriarch Gabriel VII (1525-1568). Most of the patriarchs of the 17th, 18th and 19th centuries were chosen from among its monks.

The monastery’s library comprises some 1,863 manuscripts which are of great value for the study of the Christian Arabic Literature of the Copts. The old church is the most significant building in the monastery. One of its wall paintings represents Christ flanked by the busts of the Apostles and dates from the seventh century. The church boasts the most complete program of wall paintings that has been preserved in Egypt. It dates to 1232/1233 and is the last important artistic achievements of the Copts before the waves of persecution under Mamluk rule.

The murals represent scenes from the Old and the New Testaments such as the Sacrifice of Abraham, the Meeting of Abraham and Melchizedek, the Three Patriarchs Abraham, Isaac and Jacob, the Sacrifice of Jephtah, Pantocrator surrounded by angels and cherubim, the Four Living Creatures, the Twenty-four Elders of the Apocalypse, Virgin and Child, and Women at the Tomb. Many equestrian saints such as Sts. Theodore the Stratelate and Mercurius, and some of the great figures of monasticism including Antony, Paul, Pachomius, Shenoute, and Macarius are also depicted. The portraits of St. Mark the Evangelist and St. Athanasius, patriarch of Alexandria, dominate the two lateral sanctuaries. 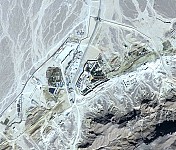